The video speaks for itself:

First of all, I think everyone understands that unlike most fights, this one is an actual, real fight -- two men who despise one another and who have said that they are going out essentially to end the other's career. 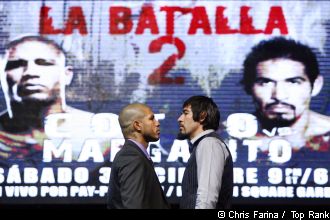 Second, I think we also can agree that Cotto seems different psychologically for this fight. He is in seek-and-destroy mode psychologically. The question now is whether his body has enough left after the battering he's taken. I say he does.

Third, I think everyone can also see that Antonio Margarito's performance on the speed bag was far from inspiring. At least wearing sunglasses, he can't see a thing, as far as I can tell.

Finally, because of all of the above, I have placed a nice wager on Cotto and the under. He's going all out for the eye; he's said so himself. I'm thinking Smoger might have a quick trigger in this one given all the attention that's been focused on the jurisdiction for the fight.

Busted: A house owned by Ivan Calderon was raided by police, who discovered $4 million worth of cocaine stashed inside. For his part, Ivan says he just owns the house, and that he doesn't live there and has no idea what its inhabitants are up to.

Busted: Joel Casamayor, who turned in a terrible performance, against Timothy Bradley on Saturday, failed his post-fight drug test for marijuana. That surely explains why he was fighting as if he were high.

Moved: The big rematch between Cotto and Margarito, scheduled for Dec. 3 at Madison Square Garden, will have to be moved due to Margarito being denied a license by the NYSAC for medical reasons. The commission apparently did not believe that Margarito's right eye, which suffered severe damage during the Pacquiao fight, is fully healed.

MANNY PACQUIAO – First of all, let me point out I thought Manny won the fight, seven rounds to five. I won’t make an argument here for the decision, because I know I’m not going to persuade anyone who thinks otherwise. But Manny did what he had to do for the “W,” realizing he could not outbox Marquez nor hurt him consistently enough to finish him, and relying instead on outworking his older rival and playing the role of the aggressor. Having said that, I feel Manny clearly overtrained for this fight. In previous camps, we all heard about how he was mailing it in until the last two weeks at the Wildcard, and then he would turn it on and by fight night would be a lean, hungry thoroughbred just chomping at the bit to run. In comparison, the lead-up to this fight indicated that Manny was peaking way too early, with Alex Ariza saying on the second episode of 24/7 that “he wished the fight were tomorrow,” a full eighteen days before fight night. That comment raised a serious red flag in my mind, and it was borne out last night when Manny looked drained entering the ring, unhealthily sweating, and during the fight, when he was constantly beaten to the punch by a man over whom he had all the physical advantages. But Manny won, so he passes this most difficult of tests. I don’t think anyone can say with a serious face—Skip Bayless, are you listening?—that Floyd is scared of fighting Manny. That concept has always been ridiculous to me, and now looks even moreso. Grade: B-

JUAN MANUEL MARQUEZ – Marquez elevated his legacy with his performance, proving that he should be considered not just a Hall of Fame-level fighter, but perhaps deserves mention among the All-Time Greats, at least the Mexican ones. If you don’t think he belongs with Chavez, Morales, and Barrera, than you never will. But in my mind, he’s proven that he’s a very special, very serious fighter that embodies the height of professionalism both in and out of the ring. No one adapts better mid-fight than Marquez, not Floyd Mayweather, not Sugar Ray Leonard. In addition to the Pacquiao fights, consider his wins against Casamayor, Barrera, Juan Diaz, Katsidis—Marquez had trouble early in every one of those fights, and he was able to make adjustments such that he had the upper hand by the end. But do I want to see a fourth fight against Pacquiao? No. Grade: A

MILE HIGH MIKE ALVARADO – The last few major PPV undercards have all produced at least one hellacious war (Vazquez-Arce on Pacquiao-Mosley, Morales-Cano on Mayweather-Ortiz, and Linares-DeMarco on Hopkins-Dawson) and last night was no exception, with Alvarado and Prescott engaging in an engrossing slugfest that was all Prescott early on, and all Alvarado late. I think many boxing fans considered Alvarado a product of Top Rank hype given his uninspiring competition and sordid background entering the contest, but he proved all his doubters wrong, showing tremendous courage in the face of a physically superior opponent who was punching ferociously in the first half of the fight, weathering the storm and eventually turning the tables when Prescott’s stamina failed him, taking the Colombian to “uppercut city,” as Max Kellerman put it. That’s a place Prescott won’t ever want to revisit, as he ended the fight out on his feet, in the arms of Jay Nady. Alvarado deserves a title shot, and Bradley-Alvarado seems like the obvious fight to make. Or maybe Rios-Alvarado. Grade: A+

BREIDIS PRESCOTT – For the same reasons Angulo failed last week, Prescott failed last night. He gassed himself trying to KO Alvarado, even when it was apparent that Alvarado wasn’t going to go that easily. Then he engaged in a phonebooth war despite having most of his success jabbing and throwing rights from range. Finally, when he was hurt, he clearly had no idea how to grab and slow down the fight. It’s back to the drawing board for Prescott, who has now lost to Miguel Vasquez, Alvarado, Kevin Mitchell, and Paul McCloskey. The KO win against Amir Khan recedes even further into the past. Grade: D

TIM BRADLEY – He got an easy assignment and he did what he was supposed to do. The assignment was crappy and proved nothing, but you can’t blame the student for the quality of the test. Bradley looked fresh and powerful next to Casamayor, but Casamyor looked only a little better than James Toney did against Denis Lebedev, an old man who had no business being in a professional prize ring at the top level anymore. Grade: B+

JOEL CASAMAYOR – I admit I have been a fan of El Cepillo for a long time now, since his wars with Diego Corrales, Acelino Freitas and Jose Luis Castillo way back when. I made a bundle on his “upset” of Michael Katsidis a few years ago, which was probably his last legitimate victory. He looked decent losing his lineal lightweight crown to Marquez. Since then, his performances have ranged from desultory to just plain awful. Last night was no exception. It was like the worst moments of B-Hop-Jones II all rolled into one performance. He grabbed whenever there was a chance he was going to be hit, used his head as often as his once great straight left, and hit low with obvious malicious intent. Hang ‘em up, Cepillo—you were once a proud champion and that is how I will remember you. Grade: F

The official scorecards from last night's big fight with the controversial result:

The co-feature of Saturday's card is a showcase fight for Tim Bradley against a faded Joel Casamayor, who is fighting at least two weight classes beyond his best weight. Casamayor hasn't looked decent since he was competitive in losing the lineal lightweight championship against Juan Manuel Marquez over three years ago, but in the fight week press conference on Thursday, he did show more fire than he is likely to show in the ring on Saturday. Check out their friendly (?) confrontation:

James Kirkland: Kirkland emerged from Saturday's medieval slugfest as The Man at junior middleweight, title or no title. Canelo's handlers, for example, must know there is no way in hell their kid is ready for this kind of task. Erislandy Lara has already called out Kirkland, and that might be an interesting fight, but then again, Lara was robbed of a decision because of lack of workrate--the same thing against Kirkland would result in him getting blasted out in one. Grade: A+

Alfredo Angulo: The savage beatdown he administered to outclassed sap Harry Joe Yorgey revisited itself upon Angulo Saturday night. The exorbitant punishment he shipped was reminiscent of Margarito against Pacquiao, or maybe Shannon Briggs against Vitali, except that it was compressed into half the rounds. Angulo's conditioning must be questioned, as he punched himself out two minutes into a bout scheduled for thirty-six, and never seemed like he was close to catching a second wind.Grade: D

Peter Quillin: In his HBO debut, Quillin showed he is a serious player at middleweight, fighting in a patient, deliberate style that won him rounds even while he was looking for the finishing combination. From the third round on, Quillin probed and probed and finally delivered the four flush connects in the sixth that triggered the stoppage. I'd like to see the two McEwan conquerors--Quillin and Andy Lee--square off for a shot against Sergio. Grade: B+

Craig McEwan: McEwan is a decent fighter, but he was completely outclassed by Quillin and brutally KO'ed by Lee the time before, so he's had his chances and not been able to come through with the kind of victory that could have sustained a career. Instead, McEwan, who has already left the Wildcard gym to go back to Scotland to train, will most likely return to the UK to vie for domestic honors, where his experience at the world class level can only prove to his advantage. Grade: F

Lucian Bute: The fight against Johnson did nothing for Bute, as he went the conservative route against his former sparring partner, choosing to outpoint him every round rather than step out of his comfort zone to try for the remarkable. Bute has now fallen from #1 on most super middleweight rankings a couple years ago down to #3 despite not having lost--his competition has been so uninspiring, however, that until we see him against Ward or Froch or Kessler, it's hard to say how good he really is.Grade: B-

Glen Johnson: This may have been Johnson's last title shot--he's gotten two in his last two fights and lost both, without really threatening either Froch or Bute, so The Road Warrior, at forty-two, slides back down to the "contender-tester" level. If he does decide to call it a career, it wouldn't be the worse time. Grade: C-

Chris Arreola: The new "skinny" Arreola looked great bombing Raphael Butler out in three fun rounds. Of course, Butler has also been KO'ed by Tye Fields, so the victory itself isn't surprising, but Arreola is starting to look comfortable with the smaller body, and his movement and coordination and footspeed appear to have improved dramatically. It's time for him to fight Wladimir, I think. Grade: A-

Mayweather Promotions and Golden Boy finally released "official" numbers for Star Power, citing 1,250,000 buys and almost $78.5 million in gross revenue which, if true, would make it the second highest-grossing non-heavyweight fight behind only the De La Hoya-Mayweather fight that generated over $135 million.

Chris Mannix of SI says he's still sticking to his own confidentially-sourced number of 1,150,000 buys. Whatever the case, it's another great number for Floyd and confirms that him and Manny stand alone when it comes to drawing viewers.

Here's footage of Toney training for his upcoming clash on November 4 against cruiserweight contender Denis Lebedev in Russia. A couple things of note: